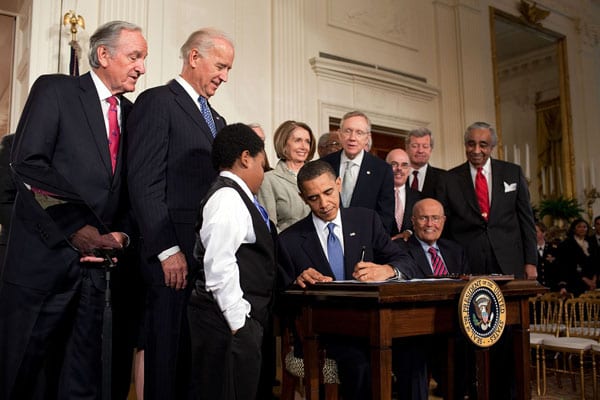 The Cure for Healthcare Reform Begins with Repealing Obamacare

After a long bout of failed expectations with the Affordable Care Act (ACA), commonly known as Obamacare, Congress is finally set to repeal the law as they have promised. A complete list of the legislation’s flaws could span thousands of pages, but the incoming Congress can prioritize and target the most egregious parts when looking at repeal and replace.

As a result of the unpopular insurance mandate, more than eight million taxpayers were penalized hundreds of dollars for not purchasing health insurance in 2016. This increased burden was supposed to “nudge” enrollment markets toward a healthy subset of the population, but enrollees “turned out to be sicker and more costly than expected.”

Experts warn of an “adverse selection death spiral” in ACA markets, as increasing prices force the exodus of healthier shoppers and leave only sick and difficult-to-insure individuals. Prices keep rising to reflect a sicker and sicker enrollee pool, and insurers opt out of markets increasingly unprofitable for them. An increasing share of ACA marketplaces across the US have only one insurer, leaving customers wondering about the merits of “managed competition.”

If nothing changes, the “Cadillac Tax” on high-end insurance plans will take effect in 2020 and inflict even more pain on health insurance shoppers. This means that plans must be worth $10,200 (single plans) or $27,500 (family plans) annually to be taxed. But, inflation will result in millions of regular plans being categorized as high-end insurance plans by the end of the next decade.

Developments are similarly dire on the Medicaid side of the ACA rollout. While the Administration regularly boasts of high enrollment figures, those figures are actually attributable to the expansion of Medicaid.   And, now,  states are beginning to realize that Medicaid expansion is not a free lunch. Federal matching funds are beginning to be rolled back, with states expected to pick up ten percent of the tab by 2020. State budgets need to be balanced, and increased dollars toward Medicaid costs crowds out other essential state functions including state health programs that already exist. According to recent studies attempting to measure the health benefits of Medicaid, this diversion away from state education and infrastructure dollars barely benefits the poor. The randomized Oregon Health Study Group experiment failed to find improved health outcomes in most categories for uninsured individuals opting into the federal program. These results are hardly surprising, since low reimbursement rates lead many doctors to spurn Medicaid patients.

Rather than trying to centrally plan health-care markets, Congress should move toward a model based on choice and competition. The appointment of Rep. Tom Price (R-Ga.) to head the Department of Health and Human Services (HHS) is the first step in the right direction, given the power of the department to steer reform. In the new Congress, Rep. Price’s proposed Empowering Patients First Act will likely gain renewed traction as an alternative to the failed ACA. The proposal’s insistence on relying on tax-free health savings accounts (HSAs) and high-risk insurance pools will introduce market discipline to health insurance markets by enabling customers to shop around. The legislation also nixes many of the unpopular taxes that increase the cost of health-care, such as the “Cadillac Tax” and medical devices tax. While Price’s plan weighs less on Medicaid, the new Congress should try to introduce a block-grant system for Medicaid. Allowing states flexibility in reforming Medicaid is important in identifying best practices and forcing cost reductions.

Even before legislation is enacted, the new head of HHS can get to work in reforming our nation’s dysfunctional health care system. The incoming HHS Secretary can loosen enforcement of ACA requirements, including the individual mandate.  Rep. Price can also increase the number of waivers available for states looking to opt out of Medicaid expansion and develop their own reform agendas. Eliminating the ACA and replacing it with a desirable alternative will prove a daunting task, and will encounter opposition at every step of the way. Only a reform plan that unleashes customers and allows market forces to work can gain a necessary constituency, and nurse our nation’s medical system back to health.