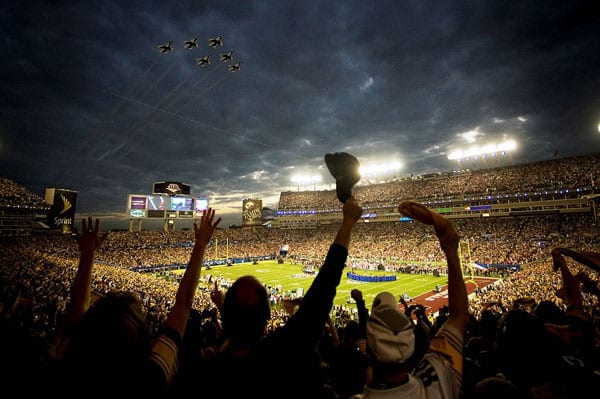 At approximately 6:30 PM this Sunday, millions of people from around the world will tune into watch the Super Bowl.  Some will be watching for the game and others will be watching for the commercials.  But, no matter who may be winning, a significant number of people will be glued to the television holding out hope that their wager on the end score is correct. These fans in search of a buck are also criminals, thanks to a twenty-year arcane law created by the federal government called The Professional and Amateur Sports Protection Act of 1992 (PAPSA).

With the exception of Delaware, Montana, Nevada, and Oregon, PAPSA prohibited states from allowing sports gambling. And despite decades of unintended consequences associated with prohibition, attempts by states to fight the outdated statue have resulted in failure.

The members of Congress at the forefront of prohibition efforts hoped to wish sports gambling away with the stroke of a pen, but betting on regulations never pays off for anyone but big government and bad actors. Just like most prohibition, PASPA’s ban on sports gambling has not been effective.  In fact, 25 years later, Illegal sports gambling amounts to hundreds of billions of dollars a year, dwarfing Las Vegas levels.

The American Gaming Association (AGA) estimates that, of the $95 billion gambled on this NFL season, $93 billion (98%) is tied up in illegal rackets. The Super Bowl will see about $4.7 billion in wagering, with 97% of that done so illegally. Moreover, surveys on gambling prevalence reveal similar levels of activity in the US and the U.K., which has allowed sports betting for nearly half a century. But unlike our transatlantic cousin, our restrictions have led destructive practices and violent behavior.

The AGA’s report on online gambling finds that the threat of theft in the underground bookkeeping world encourages bookies to only settle bets periodically, leading to the rise of credit gambling. This in turn encourages bettors prone to addiction to make larger bets then they otherwise would. Additionally, international gambling websites are often fly-by-night operations that leave bettors high and dry despite promising winnings. Vulnerable gamblers are driven to desperation by these shady players, and make even riskier bets with other bookkeepers to recoup their losses. Sky-high interest rates charged by bookies ensure that gamblers in dire straits will not straighten out their finances anytime soon.

Larger players in the illegal gambling market are often tied to other illicit activities such as racketeering and extortion. Infamous crime syndicates such as the Gambino and Genovese mafia families derive large shares of income from bookkeeping activity, and use profits to continue bloody ventures into construction and dock projects. Repealing PASPA would do a great deal to change the current landscape for the better.  Secret betting houses across the fifty states would disappear, less reliance on gangsters eager to cause mayhem, and more individual responsibility for those who want to engage in sports betting.  Allowing states to regulate gambling could also lead to increased revenues for those states, which would be a direct benefit to taxpayers.

Changing policy would also make people safer by freeing up law enforcement resources used to crack down on small operations. States regularly embark on month’s long probes of small-to-medium size gambling rings, resulting in cash seizures and arrests that are tangential to public safety. The mere threat of a crackdown discourages individuals with addiction from seeking help, out of fear of being forced into a plea bargain by the state.

Fortunately, things may be starting to change for the better. New Jersey’s repeated attempts to strike down their prohibition on sports betting will may make its way to the Supreme Court and allow for a national challenge. State legislators in Rhode Island, Missouri, and Iowa have introduced resolutions calling on Congress to nix PAPSA once and for all.

Additional pressure has been swelling from the ground up, as the National Conference of State Legislatures and the US Conference of Mayors demand a different approach than PAPSA. Seismic changes in national leadership should give hope to legalization advocates, especially given President Trump’s experience in the gambling industry. While change is unlikely to arrive in time for this Super Bowl, football fans may breathe a little easier when betting on next year’s Super Bowl.