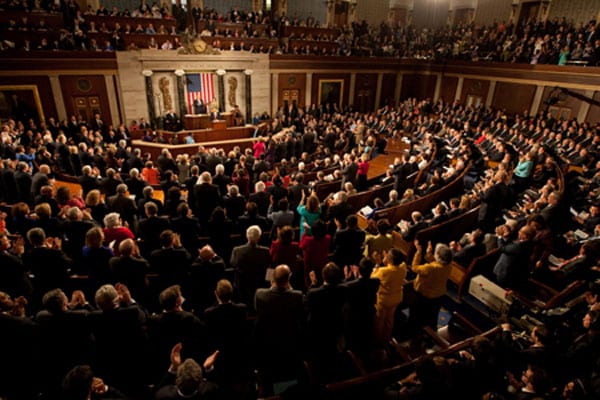 President Trump Must Address Taxes, Spending, and Regulatory Reform in Address to Congress

Tonight, President Trump will ascend to the lectern and articulate his policy vision to a joint session of Congress. Presidents have used past joint sessions to focus on a myriad of issues, from voting rights to foreign foes to economic policy. But as the new President makes his first address on Capitol Hill, the plight of the taxpayer could and should take the forefront.

Our outdated federal tax code has swelled to more than 2 million words in length, with an average of 145,000 words being added each year. Tax law is riddled with gargantuan loopholes that inflict a double whammy on taxpayers. Tax credits designed to promote specific behaviors result in some taxpayers subsidizing others, in an endless bout of lifestyle engineering from Washington DC. And, in the case of tax deductions such as the home interest exemption, loopholes distort economic outcomes and lead to bubbles forming and popping in key sectors. The plethora of carve-outs causes a headache at tax season, with tax preparation being a largely regressive, time-consuming, and expensive process. The President has a record of advocating for loophole erasure and bracket reduction, and should reiterate his goal of making the tax code simpler and less onerous.

President Trump will also need to maintain vigilance against the border adjustment tax (BAT), proposed by House Republicans in an otherwise encouraging reform blueprint. Zeroing in on imports for taxation will cause a cascade of higher prices for consumers and producers, who will likely respond to higher rates by laying off American workers. Nor is a BAT likely to remain limited to imports, as revenue-hungry politicians salivate at the prospect of taxing exports too. President Trump should launch a preemptive strike tomorrow against this backdoor value-added tax.

Our chief executive must also focus on the spending side of the equation, and use his bully pulpit to criticize the status quo of wasteful spending and kickbacks. The federal debt, which nears $20 trillion will continue to increase as long as $500 billion yearly deficits become the norm. To curtail the rising deficit and debt, President Trump needs to pick the low-hanging fruit of fiscal reform where possible.  The Government Accountability Office’s (GAO) latest report on government programs at “high risk” for waste and abuse is a useful starting point for the chief executive. The report, released earlier this month, highlights three new areas of waste-ridden federal spending and expands two existing areas. Among the more egregious examples is the federal government’s $450 billion in environmental liabilities created mainly by weapons testing. The GAO heavily criticizes the Department of Energy (DOE) and Department of Defense (DOD) for not pursuing a risk-based program of cleanup spending, and assigning large expenditures to low-risk contamination.

Another boondoggle is the 2020 Census, which is on track to cost far more than the $12.3 billion spent on the 2010 Census. Census costs continue to proliferate in real terms, with a 31% increase in cost from the 2000 Census. Even more scandalous is an avalanche of improper payments that grows every year.

The GAO recently documented $144 billion in improper payments for FY 2016, up from $137 billion for FY 2015. Ending improper payments, alongside programs such as Head Start that have been found by the GAO to be wracked by fraud, is a cause that President Trump must continue to emphasize.

Implementing the recommendations of the GAO should be a foremost priority for the Trump Administration, which has already taken admirable steps to reduce the fiscal burden from Washington. The President’s memorandum signed last month announcing a hiring freeze will keep the administrative state at bay, and slow down the rules-making bonanza that has cost taxpayers so dearly over the past few decades.

The executive order mandating the identification of two regulations for deletion for every proposed rule is another step in the right direction, and will curtail enforcement spending. Targeting new regulations such as the fiduciary rule will simultaneously reduce the need for new bureaucrats, and free up economic activity and corresponding tax revenue.

Dodd-Frank regulations must also be targeted to get our economic house in order. As the result of these Obama-era rules, more than eighty percent of small banks have faced increased compliance costs. Additionally, a quarter of small operations were contemplating mergers as the result of regulatory overload. Rather than recognizing regulations as onerous burdens that ensnare businesses and workers in red tape, agencies often classify administrative costs as economic benefits. In the EPA’s regulatory impact analysis for the stream rule, for example, agency economists quantified the creation of new bureaucracy as a benefit rather than a toll on taxpayers in an Orwellian attempt to justify government expansion.

An integrated agenda of tax, spending, and regulatory reform is clearly the way to go, but getting the policy right is only half the battle. The American people need a succinct messenger capable of identifying the costs of inaction in plain terms, and painting a message in human terms. President Trump needs to highlight the plight on millions of Americans struggling to get by, who must pay hundreds of dollars in Obamacare taxes and pass-through corporate taxes. Tuesday night presents a rare opportunity to do just that, and set the tone for a productive, cooperative relationship with Congress.