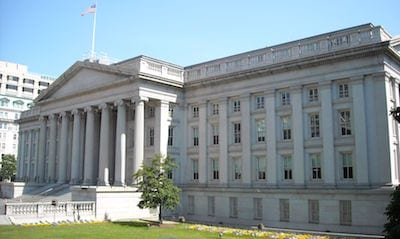 With only a few weeks left until Congress once again goes on hiatus, there is quite a laundry list of items members must tackle before September 30th. However, there is one item in the pipeline that may seem like “inside baseball” to the average taxpayer but should become a top priority for lawmakers this month, as it could have serious consequences for the U.S. economy and taxpayers

Late last week, InsideSources highlighted the unintended consequences of the Treasury Department’s new proposed rules aimed at industrial corporations as part of an aggressive effort by the Obama Administration to fight international tax avoidance. While the new rules have been a point of contention for quite some time, the article published by the investigative news source actually introduces the argument that this rule could not only hurt American business, but “end up benefiting large banks on Wall Street and elsewhere in the world.”

Ultimately the piece notes that the new rule that looks to alter standard internal business transactions for U.S. companies – or more specifically, turn intercompany debt into equity.  This could mean “businesses will dispense with managing the cash themselves and outsource the job to banks. The only banks capable of that kind of complex debt finance? Wall Street giants like Citigroup, JPMorgan Chase or Bank of America, British ones in London, or even the Chinese giants of the future.”

With the rules affecting everyday cash management practices, companies are rightly concerned about running afoul of the rules and need to involve financial institutions to manage the excess compliance. “That would both raise the costs of doing business — something as prosaic as expanding a U.S. factory — and create a new business line for banks,” the piece notes. Not only will there be unintended costs for our nation’s businesses not even looking to invert, but they will also be generating a good amount of new business and revenue stream for big banks.  For example, U.S.-based companies would turn to major Wall Street banks to process their inter-company debt transactions with their foreign subsidiaries; in the process companies would avoid Treasury’s taxes under the new regulations.

To make the matter even more dubious, not only will these institutions potentially receive tremendous windfall as a result of businesses looking to protect themselves, but three of nation’s largest banks – Citigroup, Bank of America and J.P. Morgan Chase – have requested an exception from the proposed rules to avoid paying any fees for their own intercompany transactions. If granted, the banks would be avoiding significant compliance costs that will be imposed on other businesses not granted such an exemption.

Overall, this scenario just doesn’t add up. Receiving more business on one hand while also being exempt from harmful regulations on the other doesn’t seem like a fair system. This point only supports our foremost concern that the broad scope of the proposed regulations will cause unknown impacts and unfair loopholes for businesses of all sizes.  Even the Wall Street Journal weighed in last week with an editorial noting that the rules don’t even sit well with even those who help generate them, highlighting comments from Treasury’s Deputy Assistant Secretary Robert Stack who said that the provision his department was using in this effort was a “blunt instrument.”

Not even final yet, these regulations have already causes serious contention among businesses, stakeholder groups and politicians. We cannot rush into rules such as these that might pit industries against each other and unfairly benefit some at the expense of the larger taxpayer base.