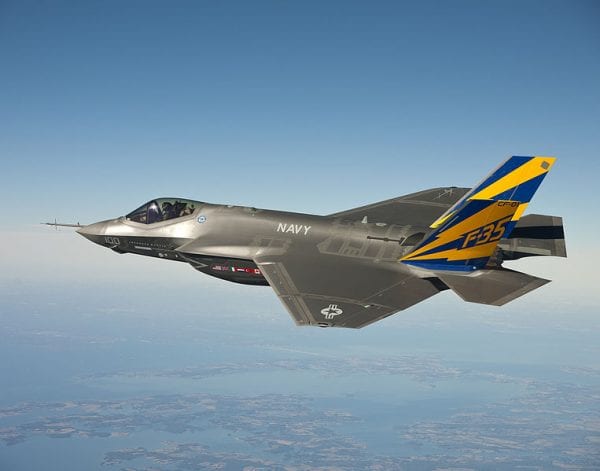 The last few months have been filled with compromise in Washington, which may seem like a good thing.  But, for taxpayers, those compromises have translated into more spending and continued waste of taxpayer money. The need for reform couldn’t be clearer when looking at the $1 trillion Farm Bill, which does little to end subsidies and keeps in place an agricultural policy based largely on picking winners and losers instead of allowing the free market to work. Another painful example was the Omnibus spending bill that was passed last month where the Taxpayers Protection Alliance (TPA) uncoveredmore than $7 billion in earmarks. The Pentagon is filled with countless examples of some of the worst kind of waste that taxpayers have footed the bill for going back decades. The F-35 Joint Strike Fighter gives new meaning to the word waste, yet there are still those defending (no pun intended) a project with problems that never cease to exist.

The F-35 was created in 2006 and throughout the last eight years the program has been rife with delays and cost overruns that have maligned the integrity of the F-35 to the point where it has become known more for the problems associated with it, as opposed to what it is was originally designed to embody. A recently released report from the Office of the Director of Operational Test and Evaluation listed a variety of issues that detail just how wasteful and deficient this program has become less than ten years since it first took off:

All of these problems are compounded by the fundamental issues that the F-35 program has been dealing with for years now that seem to keep repeating themselves without any resolution:

A jack-of-all-trades radar-evading jet meant to replace no fewer than 2,400 existing fighters in the U.S. Air Force, Navy and Marine Corps, the F-35 has been dogged by budget overruns, schedule delays and redesigns. Overly complex in order to satisfy the diverse needs of three military branches, the F-35 is slower, less durable and less reliable than many of the planes it’s slated to replace… Most damningly, the 2013 test report predicts months of delays in the development of the F-35’s millions of lines of software, which could cause the Marine Corps and Air Force to miss their planned first deployments of combat-ready JSFs in 2015 and 2016, respectively.

The most causal observer would take a look at all of these facts regarding the Joint Strike Fighter and likely come to the conclusion that the F-35 needs to be scrapped in order to save taxpayers from continuing to fund what is a clearly flawed program. Unfortunately the resolve from those aiming to protect the JSF have never been stronger, despite the work that TPA and other groups clamoring for reform at the Pentagon have continued to do. Aaron Mehta of Defense News summed up the divide:

Despite hopes from outside groups who view the F-35 as a legendary waste of taxpayer funds, the Pentagon seems unlikely to move away from the plane, regardless of how poorly it comes out in testing reviews like the one put forth this week… “I am fighting to the end, to the death, to keep the F-35 program on track,” said Gen. Michael Hostage, head of the Air Force’s Air Combat Command. “For me, that means not a single airplane cut from the program, because every time our allies and our partners see the United States Air Force back away, they all get weak in the knees. This program will fall apart if the perception is that the Air Force is not committed to this program.”

The statement from General Hostage is fitting, seeing as he appears to be holding taxpayer dollars hostage to fund a plane that can’t even distinguish between a missile intended to take it down and a flare coming from its own engine. This kind of delusional and unyielding commitment is exactly why we need reform at the Pentagon regarding their spending practices, no example could do the argument more justice.

Winslow Wheeler with the Project on Government Oversight (POGO) detailed some of the various estimates from both the Pentagon and Lockheed Martin and his conclusions are extremely alarming:

To be fully accurate, however, we should add the additional procurement money authorized for “modification of aircraft” for F-35As for 2014; that means $158 million more, bringing the total unit production cost to $181 million per copy.

So at a conservative estimate, still a loss of more than $3 billion to taxpayers. This is the kind of habitual spending that comes as no surprise to those who have been stressing the need for reforms at the Pentagon yet each time it is brought to light it becomes more disappointing because it seems there is really no end to how the government will throw away hard earned money from taxpayers. The F-35 is just one in a long list of failed programs that must end and TPA will continue to watch closely as new developments take place.