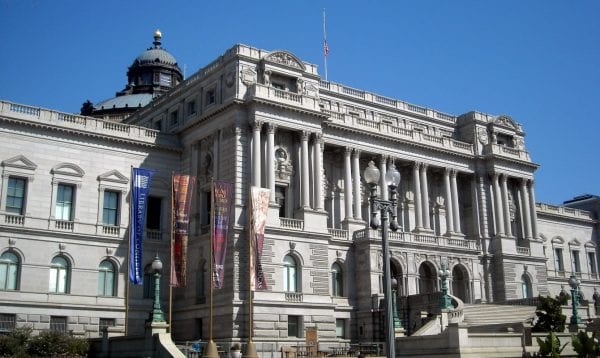 The Library of Congress, which houses the U.S. Copyright Office

It has been more than two years since the House Judiciary Committee, led by Rep. Bob Goodlatte (R-Va.), has been analyzing copyright laws. One of the conclusions from that work is that the United States Copyright Office is long overdue for an update to bring its technology into the 21st Century. The Taxpayers Protection Alliance (TPA) has been a vocal advocate for modernizing the Copyright Office and now the possibility of achieving that goal is closer.

Last week, Reps. Tom Marino (R-Penn.) and Judy Chu (D-Calif.) introduced a discussion draft of legislation that would finally modernize the U.S. Copyright Office. According to a press release by Rep. Marino’s office:

The draft legislation, Copyright Office for the Digital Economy Act or CODE Act, addresses the longstanding need for specific reforms regarding the way the U.S. Copyright Office operates. Representatives Chu and Marino are both senior members on the House Judiciary Committee, which has jurisdiction over the Copyright Office.

This draft balances concerns of the public, creators and stakeholders in the copyright community.

TPA joins an array of groups including The Copyright Alliance and The Software & Information Industry Association who have welcomed the introduction of the CODE Act in it’s earliest inception. This is a draft, but it is an important step in moving the ball forward with the goal of bringing the Copyright Office out of the past and into today’s digital age. This is a goal shared by many, but it is also key to providing a boost to the economy and to help continue the innovation that has paid dividends for creators, consumers, and taxpayers.

The problems with the Copyright Office are clear considering that the agency still employs a paper-based record-keeping system, but the industry it serves is increasingly digital. Creators and consumers are living in the digital age; yet the Copyright Office hasn’t caught up with the very constituencies it must serve best in order to fulfill its mission. The draft legislation for the CODE Act provides energy where it’s needed: the will of Congress to act when necessary.

Key components of the draft for the CODE Act include:

In a statement reacting to the discussion draft, The Software & Information Industry Association put it best:

Few other government offices are more important to the growth of creativity and commercial activity in our nation than the U.S. Copyright Office.  Despite this, many of the services it provides have failed to keep pace with technology and the marketplace.

The impact to the economy from copyright must also be taken into account, so it’s important to remember that data from a 2014 report by the International Intellectual Property Alliance showed that copyright contributed more than $1.1 trillion to the U.S. economy in 2013. A modernized Copyright Office can serve as a key boost to the innovation economy that has thrived for decades.

There has been a great deal of debate when it comes to reforming the nation’s copyright laws, but the issue of bringing the Copyright Office out from a decades-old structure is one of the most common areas of agreement for those who have a stake in copyright. TPA applauds the introduction of the draft legislation put forward by Reps. Marino and Chu, recognizing that it is a step in the right direction and that more work is needed from the Judiciary Committee and Congress to make this important goal a reality.