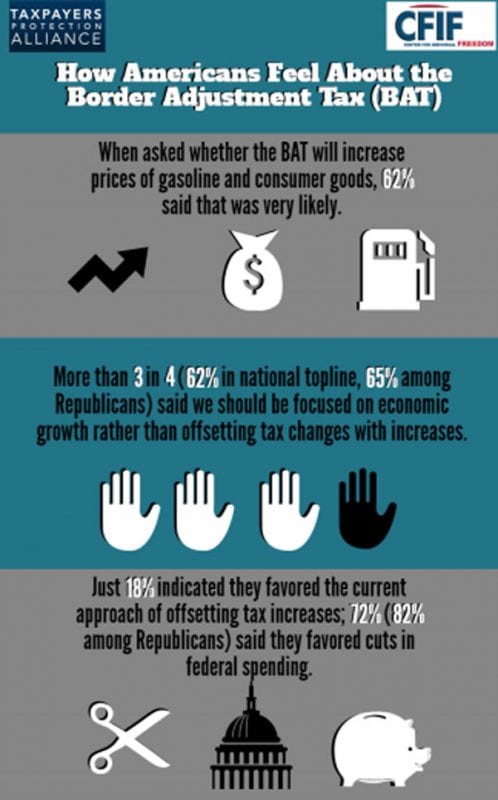 Today, the Taxpayers Protection Alliance (TPA) and the Center for Individual Freedom (CFIF) released findings from a new poll conducted to find out how the public viewed the Border Adjustment Tax (BAT), priorities for tax reform, and components of what may be included in upcoming legislation from Congress.

Leaders of both organizations reacted to the findings:

“TPA has been sounding the alarm over the BAT for months, and it’s clear from this survey that taxpayers are just as concerned as we are. Tax reform is critical, and Congress needs to put forth a plan that works for everyone. There’s a better way on tax reform, and that’s by focusing on how to reduce the size of government and cut spending, not raising taxes somewhere else.” –David Williams, President, Taxpayers Protection Alliance

“The American people recognize the BAT for exactly what it is: a trillion dollar plus effective tax on gasoline, clothing and virtually all other essential products purchased by consumers on a daily basis. Tax reform is an absolute must, but a disruptive BAT threatens not only jobs, but tax reform’s passage.  Congress should instead focus on measures that reduce spending and promote economic growth.”–Jeff Mazzella, President, Center for Individual Freedom

Here are some of the key findings:

The poll was conducted with a nationwide sample of 1001 likely voters (margin of error, 3.1 percent) with an additional oversample of 200 likely Republican voters.