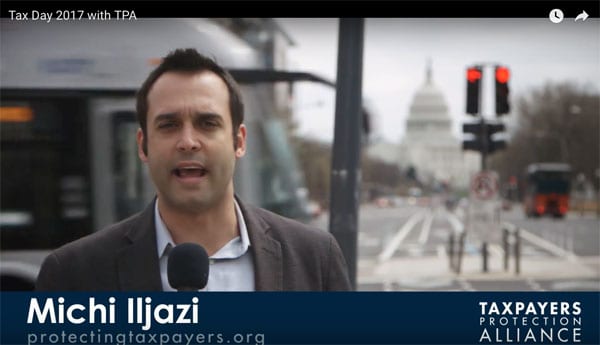 This article originally appeared in Inside Sources on April 19, 2017

Tax Day 2017 is over, and for many Americans that’s a huge relief. Unfortunately, a greater relief for taxpayers would be for Washington to make comprehensive tax reform a priority and a reality. But that has yet to happen despite having the perfect conditions to get something done. And, as the Taxpayers Protection Alliance spoke to folks from around the country, the message was clear: People from all walks of life want tax reform now.

The problem with the current tax code is crystal clear: It’s too complicated. The tax code currently has 10 million words, and growing. Every year, an estimated 100,000 words are added to the tax code. This growth causes a drain on time and money by taking away billions of hours and billions of dollars from hard-working families to comply with a code that is in real need of slimming down.

The corporate tax code is also a mess. Today, the U.S. corporate tax rate remains the highest in the developed world. At effectively 40 percent since 2012, the nation’s businesses remain at a competitive disadvantage around the world in an economy that continues to become more globalized. Inversions are continuing as companies look to make the best decisions they can for their employees and shareholders. The punishing corporate tax structure is a major reason for the growth of inversions.

Congress has known for years the problem exists as politicians from both sides of the political aisle have talked about tax reform and promised to do something. In the last several years there’s been a greater push and more substantive work on getting tax reform done.

In 2013, then-House Ways and Means Committee Chairman Dave Camp, R-Michigan, and then-Senate Finance Committee Chairman Max Baucus, D-Montana, took a bipartisan tour around the country to talk to people from all walks of life about what they wanted to see from Washington in tax reform.

Last year, House Speaker Paul Ryan, R-Wisconsin, and House Ways and Means Committee Chairman Kevin Brady, R-Texas, released the Better Way Forward on Tax Reform. While the plan is not perfect, it does show that Congress recognizes the need for tax reform. The positive trends in movement toward tax reform over the last few years are encouraging, but the road has been bumpy in recent months.

The White House has been anything but committal about its tax reform preferences. President Trump has promised a “phenomenal” plan but just last week reports surfaced that the administration decided to abandon the proposal they were hoping to introduce, making the goal of tax reform by August seem an unlikely result. This is a real setback, and one that should be taken seriously.

The inability of Congress to get things done has affected tax reform in more ways than one. There is no better example than the failure of the American Health Care Act. The bill was introduced and received a mixed reception from House Republicans and was eventually withdrawn from consideration. This was a failure for health care reform AND tax reform. Repealing nearly all the taxes in Obamacare (as AHCA would have done) would have gone a long way to providing a better economic environment in which to craft, score, and enact comprehensive tax reform.

There is some good news. Congress remains committed to getting tax reform done and the White House is pledging to work with House and Senate leadership in order to present a real plan to the American people to streamline the current tax structure. Lawmakers and administration officials agree that businesses in the United States must be more competitive around the world, and that individuals and working families should spend less time and money figuring out how to comply with an outdated and broken tax code. These are the principles that should guide comprehensive tax reform.

It’s been more than three decades since the tax code was overhauled and the time is now to pass comprehensive tax reform. Americans need a tax code that works for them and not against them. Taxpayers have waited long enough.