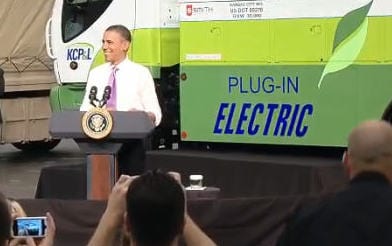 Last year, the Taxpayers Protection Alliance (TPA) featured a series of posts during the congressional summer recess called “Summer Reading.”  The weekly posts focused on specific issues that House and Senate should work on after returning from their summer break. This year TPA is bringing back Summer Reading and the first installment of 2015 centers on President Obama’s Clean Power Plan (CPP), the energy initiative announced on Monday by the White House.  CCP is the latest in a series of harmful Environmental Protection Agency (EPA) regulatory measures that will bring economic harm to taxpayers, states and working families.

According to the Obama Administration, the $8.4 billion plan is aimed at reducing carbon emissions from power plants by implementing a new regulatory rule using section 111 (d) of the Clean Air Act (CAA).  The new rule would force states to adopt their own plan in order to meet certain carbon reduction requirements:

Proponents of the plan hailed it as one of the most ambitious initiatives set forth to fight the threat of climate change.  But, in reality, the Clean Power Plan is more of the same from an administration that continues to use the executive and federal agency apparatus in order to carry out an agenda that would never receive congressional approval.

Not withstanding the lofty goals of the White House, the negative impacts the CPP will have on energy costs are very real for Americans.  At the request of Rep. Lamar Smith (R-Texas), Chairman of the House Committee on Science, Space, and Technology, the U.S. Energy Information Agency released the results of an independent study on the impact of the CPP in May. The study confirmed what many, including TPA, believed that the CPP will increase energy costs:

Retail electricity prices increase most in the early 2020s, in response to initial compliance measures. Increased investment in new generating capacity as well as increased use of natural gas for generation lead to electricity prices that are 3% to 7% higher on average from 2020-25 in the Clean Power Plan cases.

Opponents weren’t the only ones talking about rising energy prices before the final plan was released. In fact, President Obama made Americans fully aware of the costs when he promised that under his energy plan, “electricity rates would necessarily skyrocket.” With all of Obama’s policy promises, this is definitely a promise that voters don’t want to see kept.

The CPP is not just an attack on traditional fossil fuels; it’s a de facto giveaway (or redistribution) to the renewable energy industry. Setting massive targets for carbon reduction and forcing states to comply with the new rule will only ensure that green energy schemes like solar and wind will reap the benefits of new and existing incentives designed to artificially prop-up those failed technologies.

One of the most expensive subsidies for renewable energy have been solar subsidies.  As documented in TPA’s report, “Filling the Solar Sinkhole:  Billions Have Delivered Too Little Bang,” taxpayers are paying $39 billion a year for solar subsidies.  TPA continues to highlight the massive government subsidization and risky business models being employed by many in the solar industry with reports in April and July.  The CPP will only further the risk and increase the subsidies. Earlier this week in Forbes, Daniel Fisher laid out how renewable technologies will use the new plan to get more taxpayer money:

Embedded in the rule is a Clean Energy Incentive Plan, for example, that will give states extra CO2 credits — allowing them to delay some of the politically painful costs of shutting down coal plants — for encouraging the early rollout of wind and solar projects, especially in “low-income communities.” That will give venture capitalists an incentive to join forces with community activists to propose renewable projects in their neighborhoods, with environmental groups hovering over the process, possibly trading their support in exchange for donations and assistance on their own pet causes.

One of the more painful aspects of the CPP is that there is little chance it will do anything to solve the problem the administration is purporting to tackle, climate change. Writing for the www.americaspower.org blog this week, Laura Sheehan noted:

Perhaps the biggest blow of all, EPA’s carbon regulations will have virtually no effect on its stated purpose: climate change. At best, the rule will reduce atmospheric CO2 concentrations by less than one-half of one percent, global average temperature by less than 2/100th of a degree and sea level rise by the thickness of three sheets of paper – all at a cost few can afford.

Americans can’t afford the EPA’s new Clean Power Plan, and states shouldn’t be forced into regulatory schemes that will only help industry friends of the current administration. Risking job losses and more tough budgeting decisions for working families on a plan that won’t even produce the desired outcomes is reckless and inexcusable. TPA opposes President Obama’s Clean Power Plan and when Congress returns we hope they will take action (as many states already have) to fight the damage the EPA is attempting to inflict.