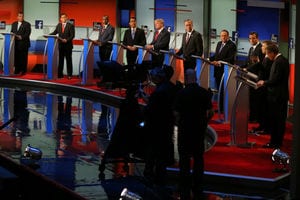 The GOP Presidential Field Abandons Fiscal Restraint At The Pentagon

This article appeared in The Daily Caller on December 18, 2015

Tuesday’s Republican presidential debate in Las Vegas was a disappointment for fiscal conservatives who care about reckless federal spending, particularly at the Pentagon.

If the previous debate was any indication, the prospect for a constructive conversation about the future of military spending showed real promise.

During the previous debate on November 10th, Sen. Rand Paul (R-KY) called out the GOP field because most of the candidates have spent the better part of this campaign season pledging to ramp up an already bloated Pentagon budget.

“How is it conservative to add a trillion dollars in military expenditures?” Sen. Paul asked. “You can not be a conservative if you’re going to keep promoting new programs that you’re not going to pay for.”

Paul’s comments turned out to be one of the highlights of that night back in November, and it seemed like a real opportunity to create momentum for a shift within the Republican party about the direction of Pentagon budget policy.

But unfortunately, the Republican candidates slipped loudly back to their comfort zone during this week’s debate.

Even Sen. Paul himself was silent on the issue, except for one coded line about being “willing to hold the line on all spending.”

As for the rest of the candidates, it was an all-out field day of pledges to throw more money at the Pentagon without any talk of reform.

Jeb Bush and Marco Rubio led the charge, promising to “rebuild our military,” and “reverse those cuts” or otherwise “be left with the oldest and the smallest Air Force this country has ever had.”

Many of the Republican candidates kept repeating that complaint about how our Air Force is, or will be, the smallest in our history because of spending cuts. But they never acknowledge that today’s jet fighters are technologically far superior to the, for example, propeller-driven planes from the 1940s. In short, it’s an irrelevant comparison.

Nevertheless, “we need to increase our military spending” was a typical refrain from Tuesday’s debate, with no discussion of specifics on why, or how we’d pay for the increase.

What was perhaps even more disappointing than Paul’s absence on this issue was that a usual budget stalwart Ohio Governor John Kasich seems to be buying in to the hysteria.

Kasich actually has experience reining in wasteful Pentagon spending as a member of Congress, a credential he touts often on the campaign trail. But it appears that the Ohio Republican is starting to reverse course with talk during Tuesday’s debate of “rebuilding our defense.” There was no mention of wasteful spending – like the dreaded F-35 – or the fact that the Pentagon has never been audited.

The Republican candidates talk as if the Pentagon has had to make do with scraps throughout the past six years. But the reality is that throwing money at the Pentagon is so popular and out of control, there is a special off-the-books slush fund called the Overseas Contingency Operations (OCO) account so the Pentagon doesn’t have to abide by the spending caps created by the bipartisan Budget Control Act.

The United States is spending more on average now than we have at any time during the Cold War.

What’s more, the United States currently spends more on defense than the next 7 nations combined, 5 of which are our allies. In fact, the combined defense budgets of NATO, plus that of Japan, amounts to 80 percent of global military spending.

Given these realities, conservatives should be debating how the Pentagon is spending its money, and questioning why the Republican candidates feel as though the Pentagon can’t get the job done with what it has.

But arbitrarily calling for increases in the Pentagon budget without ridding the waste, fraud and abuse doesn’t make us safer and only contributes to sour fiscal polices that drive us deeper in debt.