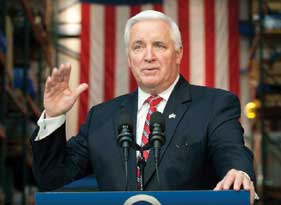 States are constantly looking for ways to get more money from taxpayers, and no matter how many times a tax increase fails to generate the desired result, we see this tactic repeated over and over again. Unfortunately, now comes yet another disappointment from a state legislature looking to fix problems with budget shortfalls.  Lawmakers in Pennsylvania recently moved in a bipartisan manner to increase cigarette taxes by $2 with the approval of the state’s Republican Governor. The move comes under the heading of aiding a troubled education sector in Philadelphia:

Gov. Tom Corbett signed the bill Wednesday, saying it will provide a steady funding source for the state’s largest school district but warned that it’s only a step toward resolving the district’s financial struggles and devising a fair formula to distribute state aid to schools.

While there’s nothing wrong with improving education standards for children in areas where the improvement is needed, the way in which those reforms are achieved can become problematic. The tax increase the Governor signed is designed to fund the school district to help Philadelphia public schools but the negative impact that tax increases can have may end up putting the state in real jeopardy of falling short in terms of fulfilling their commitment to the schools and students in that district. The Taxpayers Protection Alliance (TPA) has been a vocal critic of this type of tax increase and there is reason to show why it can actually do more harm than good on multiple levels.

First, there can be no denying that an increase on tobacco taxes eventually leads to an increase on black-market purchase of tobacco products. This is just simple math, if something costs too much for someone to purchase legally, chances are they will look for alternative sources to buy the particular item. Earlier this year, Breitbart News’ Mike Flynn reported on a new study from RTI International showing just how big a problem the black market has become for states with high tobacco taxes:

High-cigarette tax jurisdictions are losing out on up to $729 million in tax revenue each year due to illicit trade in tobacco products.

That is according to a new study from the nonprofit research organization RTI International. The figure represents an upper-end estimate of aggregate revenue foregone by the cities of Boston, Philadelphia, New York, Providence and Washington, DC. All five are top destinations for cigarette smugglers seeking to take advantage of high cigarette tax rates that push economy-minded buyers, including underage smokers seeking to avoid high, legal prices, to the black market.

Clearly the rise of illegal activity through increased black-market sales is a problem, but that also leads the other problem identified in the study: loss of revenue. The entire reasoning behind the increase is to raise revenue for education funding, but what has been shown time and again is that revenue becomes lost to bordering states and illicit traders, which is where consumers end up going as opposed to paying a high tax rate on cigarettes.

State officials in Illinois recently admitted that last June’s $1 per pack tax increase on cigarettes has turned out to be 39 percent less than initial projections, leaving a shortfall of $130 million. A report released by the Commission on Government Forecasting and Accountability showed that lower cigarette sales as a result of the tax increase has contributed to the failure to meet the expected tax revenues.

Not only did consumers stop buying cigarettes as a result of the tax, but the report also noted that consumers stockpiled cigarettes before the increase. This could be considered an example of the Laffer Curve, which shows that higher tax rates can produce lower revenues as people change their behavior in response to economic incentives.

The most upsetting aspect of what’s happening in Pennsylvania is that even after there have been studies and actual real-world examples in neighboring states that showcase just how ineffective and redundant cigarette tax increases actually are, the state acts in bipartisan manner to repeat the very same mistakes that are costing taxpayers and small businesses in various states all over the country. The Tax Foundation had a sobering assessment of the passage and signing of the cigarette tax increase:

Unfortunately, not only is this unsound tax policy, but the main effect will probably be to boost black- and gray-market trade in cigarettes. The real winners here aren’t school officials, but cigarette sellers just outside of Philadelphia.

Using cigarette taxes to fund education is problematic. Whatever social costs cigarette smoking may have, surely the way to compensate those costs is to spend money raised on tobacco education and tobacco-related health spending? Spending the money on education makes a vital social service financially dependent on an extremely volatile (and declining) revenue stream. Indeed, as we wrote about a previous plan to expand preschool using cigarette taxes, cigarettes and preschoolers just don’t go together.

The anticipated additional revenue from an increase in tobacco taxes is nothing more than Fool’s Gold.  If states want more revenue, they should lower taxes and increase their tax base rather than raise taxes and chase people, businesses and dollars out of their states to low tax states.