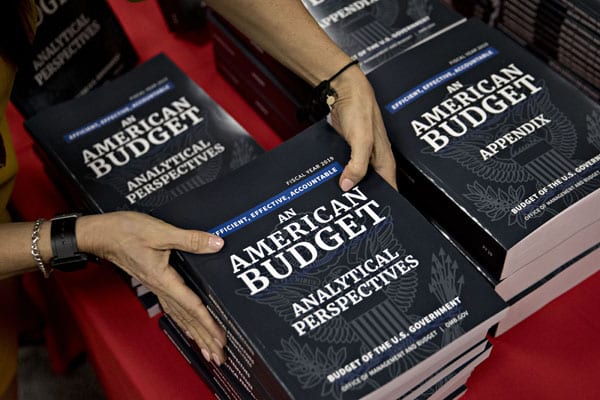 A Tale of Two Budgets

Analyzing the President Trump’s Fiscal Year 2019 Budget is a bit like reading Charles Dickens’ A Tale of Two Cities. The best of proposals, which control spending by cutting down wasteful spending, are certainly in there. But then there’s also the worst, reflecting an “age of foolishness” marked by a never-ending naiveté about government spending and deficits.  Paired with much-needed cutbacks are budget busters that will put the deficit at nearly $1 trillion through the end of President Trump’s first term. The Administration and members of Congress would be well-served to veer off the path of trillion-dollar deficits and avoid reckless infrastructure and national defense spending. In this tale of two budgets, doubling down on the best proposals while ditching the worst can yield taxpayers more than $4 trillion in savings through 2028.  A better outcome would be a budget that balances.

To save lay readers from the inevitable “winter of despair” that would come through reading the entire budget document, the Taxpayers Protection Alliance (TPA) has highlighted some of the best proposals and the worst ones. With an expected FY 2018 budget deficit north of $800 billion and a debt of more than $20 trillion, only fiscal responsibility can save us from an “epoch of incredulity.”

The best of proposals:

Supplemental Nutrition Assistance Program (SNAP) benefits are largely exempt from work requirements, and program eligibility has been loosened over the years. As a result, food stamp participation stands at 12 percent of the American population, a sizeable jump from the 7-9 percent range typical of economic growth years in the 1980-2010 period. Data shows that roughly 1 percent of American households would go hungry if they did not have access to food stamps, suggesting that SNAP benefits serve more than the truly needy.

Curtailing the growth of these federal programs untouched from welfare reform would restrict funds to the truly needy, while encouraging recipients to find livelihoods that would bring happiness and fulfillment. Through introducing work incentives and further devolving the program to the states, the Administration and Congress can lift millions out of poverty while saving taxpayers billions of dollars

SSDI is yet another example of a government program that fails to deliver on expectations. The program, designed to provide a buffer for individuals mentally or physically unfit to work, has grown to accommodate individuals without an “objective” diagnosis who report pain or suffering. Additionally, Administrative Law Judges (ALJs) without a background in medicine have the ability to approve twice-denied applicants in a court of law, without actually having to examine the applicant in-person.

Simple reforms, such as subjecting ALJs to a probationary period, could save taxpayers billions of dollars by giving these arbiters an incentive to not be overly-generous in granting benefits. The budget is light on details, but opens the door to important administrative reforms that will ensure the tightening of eligibility. The Social Security Administration (SSA), for example, will also be required to study “new approaches to increase labor force participation.”  Approaches like the generalized benefit offset (GBO) can save the Administration billions of dollars over the next decade by inducing capable individuals to enter the workforce, increasing economic activity and thus taxes paid.

The worst of proposals:

The President proposes to chip in $200 billion (on top of the $21 billion included in the February 9 spending deal) to spearhead a massive $1.5 trillion infrastructure deal. While the Trump Administration expects the private sector to foot the bill for the rest through a public-private partnership, taxpayers should be weary of buy-ins to expensive projects far removed from needed repairs and maintenance. Around 20 percent of funds will go toward the creation of a Transformative Projects Program, which would finance “exploratory and ground-breaking ideas” in infrastructure. This may sound bold and daring, but the federal government has a long history of squandering taxpayer resources on ill-fated “cutting edge” ideas.

Funding for California’s high-speed rail project in the Stimulus package, for instance, has proved a poor investment due to a series of cost overruns and scheduling delays. Originally slated to cost $6 billion, the portion of the “bullet train” running through the state’s Central Valley is now estimated to run nearly $11 billion, if it is ever finished. The slated completion year of 2018 has been set back to 2025, and the plan may need to be scuttled altogether pending the results of an audit. And, granting top officials more flexibility to fund pet projects would likely yield even more waste. Anthony Foxx, who served as the Secretary of Transportation during Obama’s second term, expressed a great deal of interest in the Hyperloop concept and suggested that federal funds could get this and similar projects off the ground. But as pointed out by Brad Plumber, leading proposals vastly understate land acquisition and per-mile construction costs.

When engaging with the private sector, it’s easy for “public-private” partnerships to go awry with billions of dollars borne by taxpayers. Without proper oversight, the President’s infrastructure funding could prove a costly step back.

On February 9, Congress finally acquiesced to military leaders and blew the lid off of spending caps. The President’s budget acknowledges this 15 percent increase over two years, and details how the increase should be doled out. Similar to last year, the document calls for more aircraft “investment” and modernization, despite the near-capitulation of the Islamic State and status-quo in Afghanistan.

Taxpayers should be wary of the massive cost overruns that often come with aircraft development at the Pentagon. The F-35 program is particularly problematic, with projected per-plane costs nearly quadrupling over the past two decades.  If the F-35 debacle has taught us anything, it’s that the government shouldn’t be throwing money into a fiscal black hole absent stringent verification.

Additionally, the budget calls for a 16,400 increase in service members, compared to the currently-authorized end strength level. The specific justification for this increase is unstated, but may be used to bolster a “surge” in Afghanistan as the Pentagon pivots from Iraq. It is unclear how a continued expansion in ground presence will be helpful, especially given the previous failure of operations in the war-torn country.

When dealing with fiscal shenanigans in Washington, DC, taxpayers are too often asked to take the bad with the good. But a “tale of two budgets” needn’t be the norm going forward. By scaling back Pentagon and infrastructure pet projects, the Administration can send a message that it’s serious about reigning in special interests. Across-the-board spending reductions can turn a “winter of despair” into a “spring of hope.”

This is a preliminary analysis from TPA.  Be sure to check back as we take a deeper dive into the budget.