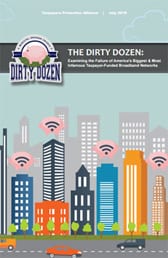 WASHINGTON, D.C. – Recently, the Taxpayers Protection Alliance (TPA) released results of a national phone survey along with a new analysis of twelve failing taxpayer-funded municipal broadband networks around the country. The phone survey showed that the vast majority of Americans are strongly opposed to government-owned internet networks. The new report titled, “THE DIRTY DOZEN: Examining the Failure of America’s Biggest & Most Infamous Taxpayer-Funded Broadband Networks” details 12 of the country’s failed Government-Owned Networks (GONs) and how taxpayers have been paying billions of dollars for the failures. Click here for poll results and here for the report.

The survey found that two-thirds of respondents (64% opposed with 48% of those strongly opposed) would NOT support their local government going into debt so that it could sell high-speed internet access directly to consumers. In fact, a majority of voters across the partisan spectrum and in every region of the country, as well as in every type of community, whether rural or urban, city or suburban, oppose local governments incurring debt to build their own high speed internet networks.

Americans feel no urgency for the government to get involved in the broadband market.  Three-quarters of respondents feel that access to high-speed internet is not a “serious” problem facing their community. Moreover, access to high-speed internet ranks dead last on a list of issues that voters think elected officials should prioritize, with only one percent saying it is important.

Voters also are not convinced that government-owned networks are essential to local economic growth. In fact, just four percent of those surveyed said they believe government-owned networks would entice companies to expand or locate their business in a particular geographic area. Just 11 percent said local governments would do a better job of providing internet service than the private sector. Finally, an overwhelming majority—65 percent—believe that high speed internet is inevitably coming to every community in this country, no matter what government does.

The government-owned network failures in this report cost taxpayers nearly $2 billion and show that government can be good at something, wasting money. In Utah, to pay for the $39.5 million iProvo network, bonds were taken out that had to be paid back at a rate of $278,000 a month for 20 years – or a total of more than $66.7 million, including interest. After Memphis Networx collapsed, Memphis residents lost $20.5 million. In Louisiana, the initial investment for LUS Fiber was $125 million, but after additional expenses and interest charges, the project cost taxpayers $160 million.

According to the report, “The most important step government can take to ensure residents and businesses are served by a capable, competitive internet system is to reduce tax burdens and regulations on internet providers.”

TPA President David Williams commented on the release of the polling and report saying, “It is clear that taxpayers want tax dollars spent on essential government services rather than these broadband networks.”  Williams continued, “TPA has been working for years to expose the problems with these government-owned networks, and the Dirty Dozen report details just how much taxpayer money has been wasted on a failing model. Our communities deserve better and taxpayers should no longer be forced to pay for these failed government-owned networks.”