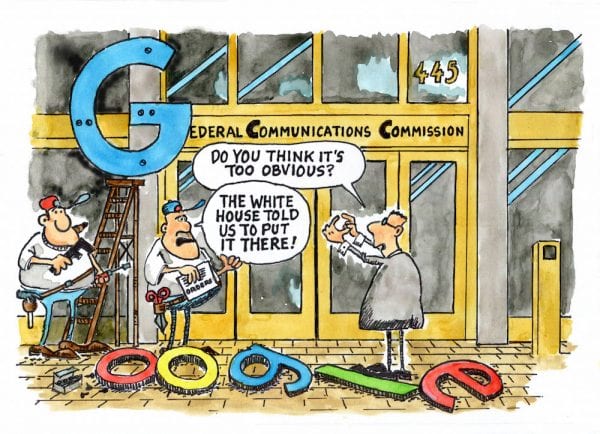 The FCC and Google, Too Close for Comfort

Cronyism continues to be a problem in Washington with federal agencies creating regulations and policies that favor one company over other companies.  There is no more blatant example of this than what seems to be happening with the Federal Communications Commission (FCC) and Google.  FCC Chairman Tom Wheeler has consistently promulgated rules and regulations that benefit Google more than other companies in the tech industry. Chairman Wheeler came to the FCC and promised to be a fair-minded Chairman who would run the agency listening to all ideas and being open to all approaches.  But, the record reflects otherwise.

The relationship between Google and the Obama Administration is well documented and it goes back years. A recent report examining White House visitor logs revealed that Johanna Shelton, Google’s director of public policy, has met with administration officials 128 times since President Barack Obama took the oath of office in 2009.

And, as Erik Telford detailed for TheBlaze.com:

Google, and particularly its Executive Chairman Eric Schmidt, have a relationship with President Obama that is too close for comfort. Schmidt has been a top-dollar donor to Obama since 2007, has consulted on his campaigns, and currently serves as a member of the President’s Council of Advisers on Science and Technology. According to press reports, he was offered the post of Treasury Secretary in the second term–but ultimately declined. While holding court as one of Obama’s most trusted and generous confidants, Schmidt has continued to serve as one of Google’s most visible government relations operatives.

It seems like a reasonable conclusion to make that this relationship has played a role in the way in which the FCC has steered policy that primarily benefits Google.

Last year the FCC voted along party lines to approve net neutrality rules that reclassified broadband Internet service under public utility-style Title II regulation. This overly aggressive regulatory approach, which is currently being challenged in Federal Appeals Court, threatens to suppress innovation and commerce, while harming taxpayers and consumers. Google came out strongly in favor of net neutrality and even used its influence on the FCC to tailor the proposed regulations to their benefit. According to Politico, Google and pro-net neutrality activists helped tweak the proposal right up to the last minute.

Cities and states across the country are building broadband networks with taxpayer dollars.  These taxpayer-funded networks either fail or end up costing more money and providing less quality than what private sector competitors are offering (click here for TPA’s previous work). The FCC has made a strong push to increase the number of these taxpayer networks around the country, even going so far as to pre-empt states from taking action to limit municipal broadband at the state and local level. The decision to push for more government broadband eventually benefits Google because Google buys these networks for pennies on the dollar after they fail. When all is said and done,  it is taxpayers who have built, and paid for, a broadband network for a multi-billion dollar tech company.

Provo, Utah is an example of how Google benefits from the failed taxpayer-funded network. Utah taxpayers lost more than $30 million after the city was forced to sell its network to the highest private bidder, Google. The highest bid for Provo’s network was $1. Backed into a corner, Provo officials accepted the deal and taxpayers lost while Google won.

Google is also looking for other taxpayer-funded networks to use.  According to a February 2016 article in ARS Technica:

Google Fiber said on Monday that it plans to bring its gigabit Internet service to Huntsville, Alabama. But instead of laying its own fiber, Google will offer service over a network that is being built by the city-owned Huntsville Utilities. Huntsville will lease space on the network to Google so it can offer Internet service.

Google is also encouraging more taxpayer-funded networks by financially supporting groups like Next Century Cities, a group that advocates for taxpayer-funded broadband networks.  This could be a new form of corporate welfare, known as backdoor corporate welfare.  The company isn’t receiving the taxpayer funds upfront, they are encouraging the building of these systems hoping and expecting them to fail so they can swoop in and buy the systems for pennies on a dollar.

In order to accomplish all of this, Google needs the FCC to continue to push for more taxpayer-funded networks.

The FCC’s AllVid proposal, which TPA opposes, would require traditional pay-for-TV providers to make video programming available to third-party devices. While the goal of AllVid is to “unlock” the content of set-top boxes so that all can compete, the new regulations would upend the way content and programming is negotiated, advertised and delivered.  Most of the power over content location and advertising would be in the hands of regulators and not the companies that provide the content.  Since the agency and administration have such close ties to Google, it should be no surprise that the company is one of the few who supports the proposal. Jonathan Kanter summarized why for The New York Times:

The F.C.C.’s proposal would give Google free access to the raw TV programming data it needs to power its search engine for TV. In effect, Google could use the data to become the modern version of the program guide, connecting users to the TV shows and movies that Google’s search algorithms determine are relevant.

These three examples, plus a rulemaking proceeding on privacy still yet to be decided by the courts, are key in understanding why some are concerned that the FCC and Google have too cozy of a relationship.  The agency shouldn’t be making policies that favor a single company.  The FCC is supposed to be an independent body. Google doesn’t need favors from the government and taxpayers shouldn’t be the ones forced to pay for those favors.