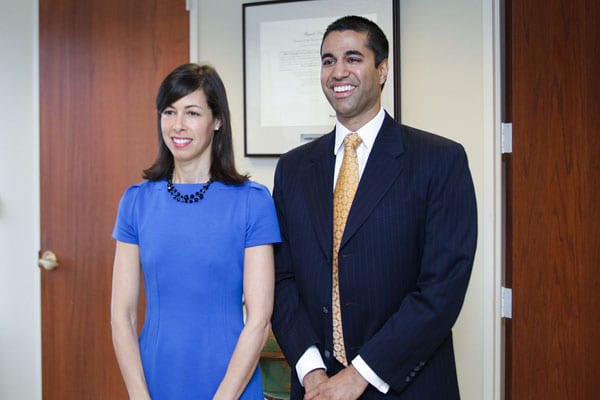 This article originally appeared in RealClearFuture on May 21, 2017

The Federal Communications Commission (FCC), led by Chairman Ajit Pai, voted 2-1 on May 18 to begin the process of reversing Obama administration policies that classified internet service providers as Title II public utilities and put them under the agency’s thumb. Advocates of the change hope that removing the regulations will boost private-sector investment and reduce the call for taxpayer- and ratepayer-funded broadband networks.

Title II classification gave the FCC more stringent oversight over those providers, allowing the agency to enforce ex-Chairman Tom Wheeler’s version of “net neutrality,” purporting to prevent those companies from inhibiting or slowing down access to certain websites or web services.

But those regulations hang “like a black cloud,” according to two dozen smaller ISPs who wrote Pai recently, noting they are heavy handed and hurt innovation and investment. Those providers, members of the American Cable Association who were branded “gatekeepers” by Wheeler as he justified Title II regulations, said it’s not in their interests to slow down traffic.

David Barnes, director of policy engagement for Generation Opportunity, alluded to the innovation issue when he issued a statement applauding Pai’s move.

“Before the FCC’s power grab to regulate the internet as a utility, the internet was one of the most dynamic and innovative parts of our society. Net neutrality is a heavy-handed solution to a problem that does not exist for customers,” he said. “Now, my generation, which created many of the most important online companies, will keep building new products to make everyday lives using a freer internet.”

In that way, the regulations imposed under Wheeler’s FCC are somewhat akin to heavy-handed drug price controls pushed by the left. They argue that consumers shouldn’t be forced to pay high prices for medication, but pharmaceutical manufacturers often invest billions to develop those drugs, which can take more than a decade to make it to market. Manufacturers not only need to recoup those costs, but also use that revenue to fuel the research and development that might result in the next life-saving medication.

Pai previously told PBS that imposing Title II regulations, first implemented in the 1930s to regulate the Ma Bell telephone monopoly, could hurt the fight to eliminate the broadband divide that now exists between urban and rural areas. He said a recent study found that investment is down 5.6 percent over the past two years among the top dozen internet providers, and noted the ISPs who wrote him said Title II is making funding for expansion investment difficult to obtain.

“My concern is that, by imposing those heavy-handed economic regulations on internet service providers big and small, we could end up disincentivizing companies from wanting to build out internet access to a lot of parts of the country, in low-income, urban and rural areas, for example,” Pai said.

Critics of Wheeler’s regulations say the rise of municipal broadband networks in recent years goes hand-in-hand with the former Democratic chairman’s tight grip on ISPs. With those providers disincentivized to expand their networks to hard-to-reach, and less profitable, areas, bureaucrats have stepped in to fill the void.

Ending the Title II classification would revert ISPs back to a Title I classification, making them information services rather than utilities, a designation placed on them via the Telecommunications Act of 1996, which was signed into law by President Clinton, by the FCC in 2002 (cable modem services) and 2007 (wireless broadband internet).

The ISPs who wrote to Pai are concerned the current rules include a provision called the “general conduct standard” that gives the FCC wide latitude to look at practices the commission thinks could hurt the open internet although they don’t actually violate Title II rules.

“The General Conduct rule represents perhaps the worst of government regulation,” they wrote. “It is so vague and open-ended that we are concerned that the Commission would invoke it to sanction conduct for which we have no advance warning. Moreover, the mere threat that the Commission may use the General Conduct rule to impose rate regulation affects our ability to obtain financing.”

GOP leadership that have opposed the Title II classification, including Sen. Greg Walden and Reps. John Thune and Marsha Blackburn, applauded Pai’s move in a statement.

“We have long said that imposing a Depression-era, utility-style regulatory structure onto the internet was the wrong approach, and we applaud Chairman Pai’s efforts to roll back these misguided regulations. Consumers want an open internet that doesn’t discriminate on content and protects free speech and consumer privacy,” they wrote. “It’s now time for Republicans and Democrats, internet service providers, edge providers, and the internet community as a whole to come together and work toward a legislative solution that benefits consumers and the future of the internet.”

A public comment period will follow Thursday’s vote, and a final decision will be made by the FCC sometime after that period closes on Aug. 16.

It is clear that Chairman Pai is moving in the right direction as the FCC undoes the damage done by excessive government control of the internet.