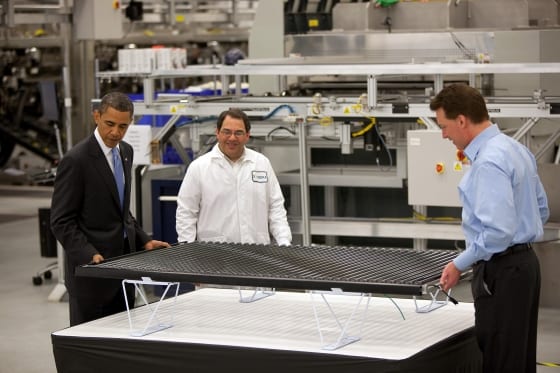 Did We Learn Anything from the Solyndra Debacle?

This article originally appeared in Inside Sources on September 22, 2015

As if Solyndra’s monumental failure was not enough of a blow to taxpayers, a new report from the Department of Energy inspector general four years in the making finds the infamous solar company deliberately deceived Energy to secure millions of dollars from the federal government (read: taxpayers).

What’s more, it appears the Obama administration was at the helm of the scandal.

There’s no surprise that the administration refuses to see the truth about solar power considering that the vice president pledged an additional $102 million grant program for companies, universities and research laboratories to further expand solar power use. It is clear that the administration is ignoring all warning signs and doing whatever it can to shovel more tax money to an unproven and financially risky power source.

Solyndra quickly became synonymous with wasteful spending and government absurdity after it received $535 million from taxpayers then went bankrupt. And, when news broke in 2011 that Solyndra was laying off 1,100 employees, just two years after receiving the loan guarantees, much of the American public was outraged.

It appears that Solyndra would be followed by case after case of the administration’s failed solar energy policies. Over the last five years alone the federal government has indiscriminately spent $150 billion subsidizing solar power and other renewable energy projects. With favors like that, it is no surprise that companies have failed to be fully forthcoming in loan applications.

Solyndra’s many filing errors, seemingly deliberate, have been particularly egregious. The inspector general report reveals that company officials provided the Energy Department with “statements, assertions and certifications that were inaccurate and misleading.”

Not only did the disgraced solar company misrepresent known facts, it intentionally neglected to provide vital information throughout the loan process. Fast-forward a couple of years, and taxpayers lost hundreds of millions of dollars.

The administration has not been innocent is this debacle. The investigation uncovered that employees at Energy acknowledged feeling enormous pressure from department leadership, the administration, Congress and the applicants to push Solyndra’s loan application through. Important details were subsequently ignored and faulty information was passed over without a second thought, even if glaring errors persisted.

Throughout meetings with Energy officials, Solyndra leadership lied about anticipated revenue from customers. In one case in particular, a customer whose contract was valued at more than $325 million had contested Solyndra’s high asking prices and declined to buy any more solar panels unless prices dropped.

Solyndra did not budge, proceeded to lose the contract, and did not consider it necessary to notify Energy that its projections would now be entirely inaccurate since, by that time, all seven contracted customers had already received price concessions.

At no point did Solyndra elect to be forthcoming about contract changes even though internal projections were less than promising. In fact, in a series of email exchanges a Solyndra official assured the loan consultant that all the figures provided were correct — a calculated lie.

Nevertheless, the loan applications proceeded as normal even though the Energy Department had previously received spreadsheets with troubling sales results. Sale volumes and contract prices were well below contract prices.

If the consultants at Energy had read through this information carefully — which they had admittedly not done — it would have been clear that Solyndra’s sales contracts were not being enforced. Although Loan Office employees sent three emails alerting two Energy officials of the problem, no action was taken. What a disaster.

Over the last five years American taxpayers have spent an average of $39 billion a year financing grants, tax credits and loans such as the one received by Solyndra in 2009. The administration is obsessed with making solar energy cheaper and more popular, even at the expense of basic honesty and decency. Taxpayers lost millions thanks to Solyndra alone, and the pattern continues with numerous stories of the same kind.

Federal and state governments must stop gambling with taxpayer money and deceiving the public when their “investments” crash and burn. Get the government out of the subsidy business and companies themselves will be required to conform to the needs of consumers. Unless these ludicrous loan guarantees stop, another Solyndra-like catastrophe will inevitably ensue.