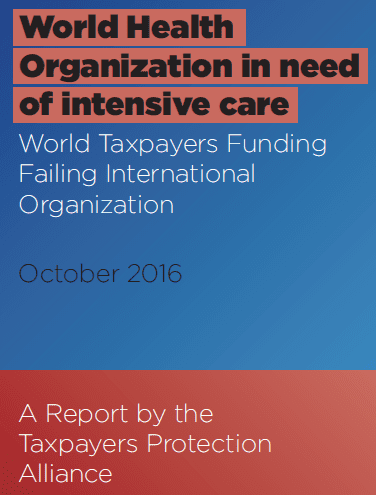 WASHINGTON, D.C. – Today, the Taxpayers Protection Alliance (TPA) released a new report detailing the public funding of the World Health Organization (WHO), and the Framework Convention on Tobacco Control (FCTC), the United Nation’s (UN) tobacco-control agency. The report (linked here), titled The World Health Organization in Intensive Care, lays out the massive amount of taxpayer money that is going to further some of the anti-freedom, anti-intellectual property activities of the United Nations.

The United States funds the UN and the WHO and those organizations continue to express ideas and engage in policies that are contrary to the values and principles that America stands for when it comes to press-freedom, transparency, and intellectual property.

TPA President David Williams said of the report, “Taxpayers shouldn’t be funding activities that promote values and actions inconsistent with the principles of the United States. Barring reporters from conferences that dictate policy, promoting directives that infringe on intellectual property, and a host of other actions should give taxpayers pause when they find out how much money they are giving to prop-up these global organizations.” Williams also called on elected officials to read the report and do their job, “Congress needs to conduct proper oversight because taxpayer money is being funneled to the UN and WHO to undermine American ideals and interests.“

Williams concluded by noting that this report is just the beginning, “TPA will continue to call for more accountability at the UN and the WHO. Our organization, and others, will continue to shine a light on the fact that billions of taxpayer dollars are funding these world bodies.”