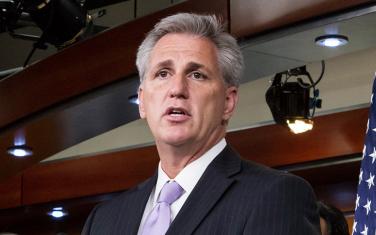 Catfish Rule Has to Go and McCarthy Can Make it Happen

This article originally appeared in The Bakersfield Californian on August 9, 2016

When LeBron James left Cleveland to join the Miami Heat, fans across the city burned his jersey in effigy. A shocking turn of events from when he was first signed with the Cleveland Cavaliers. But, when he returned to Cleveland in 2014, fans greeted him with open arms.

They were rewarded for their loyalty when the Cavaliers won an NBA championship this year. Now, LeBron is a true hero and fan favorite for his hard work.

Coming home has that effect for many, not just athletes. Taxpayers across the country hope House Majority Leader Kevin McCarthy’s time at home during Congress’ August recess will remind him of his fiscally conservative roots and why he went to Washington in the first place. McCarthy’s website says that, “Washington needs more accountability, transparency, and leadership to manage out-of- control spending and a staggering multi-trillion dollar national debt.” We couldn’t agree more.

McCarthy once described an energy bill as “a double kick in the teeth to American families and small businesses – costing jobs and increasing household costs.” That’s an apt description for the United States Department of Agriculture catfish regulation. It’s a program that McCarthy has the chance to easily get rid of, if he can reconnect with his Republican roots that call for less government waste, fewer duplicative federal programs and an end to unnecessary regulation.

Just before he headed back to Bakersfield last month, the Senate voted to get rid of the program because it costs taxpayers nearly $200 million over 10 years, and is having USDA do a job already done by the Food and Drug Administration.

The Government Accountability Office has called USDA catfish regulation a waste 10 times. And, more than 200 members of the House are insisting they be allowed to vote on getting rid of the program just as the Senate has. But McCarthy has not scheduled a vote.

It’s an easy vote for somebody who brags about bringing more leadership to manage out-of- control spending.

McCarthy’s delay is a dangerous game for vulnerable Republicans who should be eager to kill this program and illustrate their commitment to getting rid of an unnecessary and expensive program. Meanwhile, a chorus of conservative groups are publically to questioning why Republicans in the House, who campaign as waste cutting champions, haven’t voted on this repeal yet.

The National Taxpayers Union wrote that the next step is “allowing the House to vote,” while Citizens Against Government Waste insist “leadership must act soon.” Taxpayers for Common Sense noted that “Now, it’s up to leadership in the House of Representatives to bring the bill to a vote.” All of those voices at a time when the Wall Street Journal’s own editorial writes, “Repealing the catfish boondoggle is basic hygiene for a party that still claims to support free markets, responsible regulation and fiscal restraint.”

Here’s hoping some subtle clues about what real taxpayers and small businesses at home want reminds Mr. McCarthy that getting rid of waste in Washington is still a priority. In a year when people across the country are loudly showing their disdain of “business as usual” in Washington, Rep. McCarthy would be wise to allow this vote.